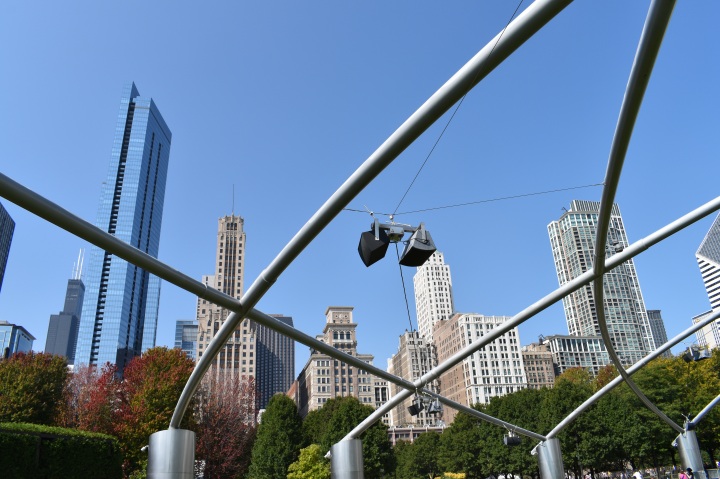 If you ever thought two days is not enough time for a vacation, you are sorely mistaken.

This weekend I went to Chicago for the first time and honestly, this post went through an insane amount of editing to get it down to a . So far, I have left all of the cities I have traveled to making a list of things to do next time; however, my cousin, Tanya, managed to show me every corner and crevice of the city to the point where if I didn’t visit for another year, I would still feel like I had done enough. But I mean this in the best way possible because I got to see the city from a native’s eyes.

Where I stayed: Country Club Hills, Illinois
Fortunately again, I had a place to stay when I visited. I stayed with my aunt, uncle, and cousins about 45 minutes south of the city (without traffic).

What I did:
1. Skydeck Chicago
I went to the infamous Skydeck where you go to the 103rd floor of the Willis Tower and step into the glass box overlooking the city. I am not afraid of heights so I never anticipated feeling scared, but once I stepped in, it was a crazy feeling. I felt pretty nauseated, and it also didn’t help that the person/people in the box next to me were jumping up and down. But once I remembered there is nothing forcing me to look down and that this has obviously been tested for stability, I turned my focus toward getting a good shot with my limited time.

It is best to get here right when the Skydeck opens at 9:00 a.m., and even better on an off day where tourists aren’t ready to be out early in the morning like a Friday or Saturday. Frankly, you need to have or know someone with good editing skills because if it’s a sunny day, don’t expect to get a good shot of both the city and yourself.

2. Millennium Park
I briefly stopped here on the way to one of my tours to view The Pritzker Pavilion where an opera was being performed. I ended up coming back here on Monday evening to get pictures with the infamous Bean. 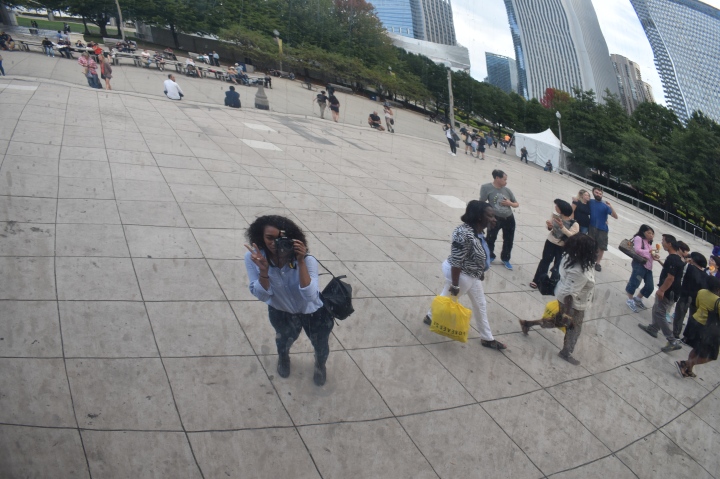 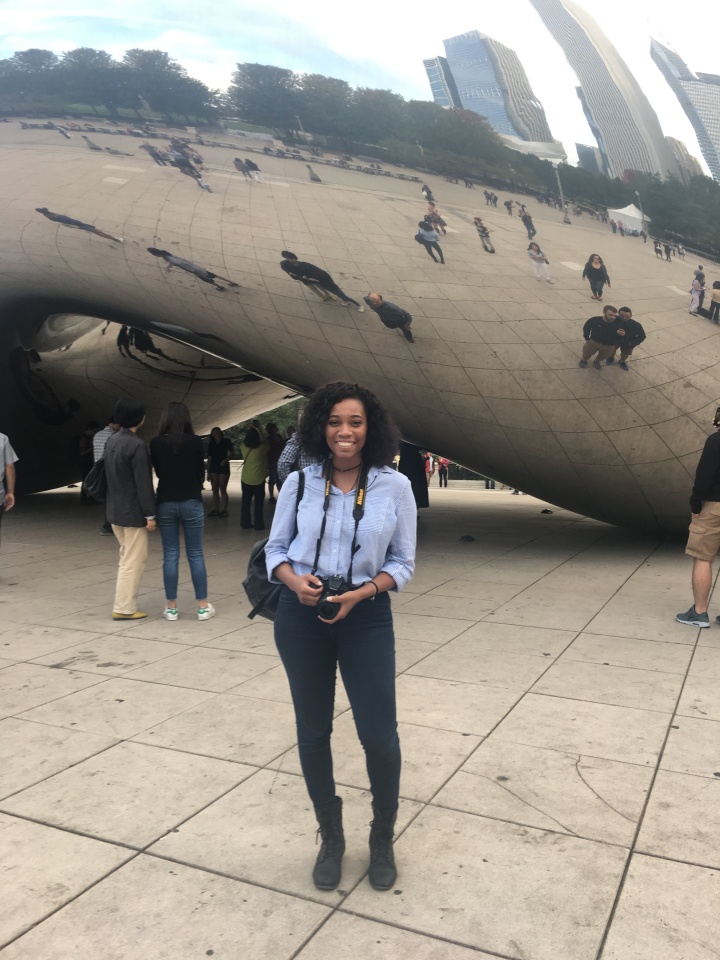 Nobody understands the point of The Bean, but it’s just so cool-looking and makes for great photos.

3. Chicago Segway Tour
The Chicago segway tour was a 2.5-hour tour of south Chicago. You spend the first 30 minutes learning about safety and how to ride a segway and the rest is full speed ahead. It takes you through Grant Park to the museum campus which features The Field Museum, Shedd Aquarium, and Adler Planetarium and then back through Grant Park to return to the same spot. 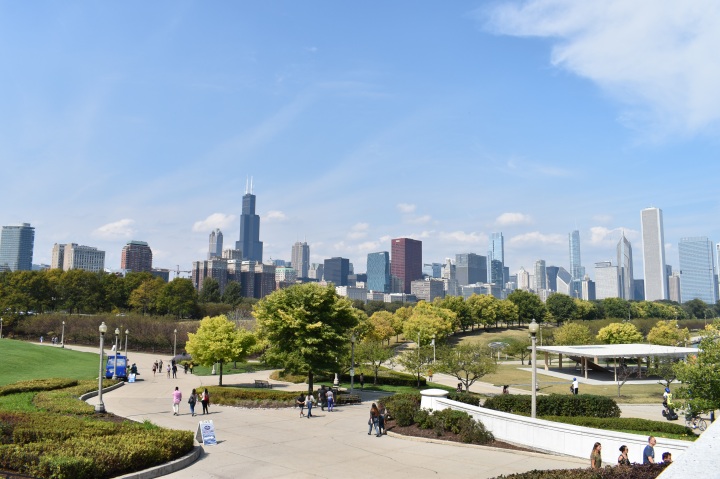 To me, this was an awesome and fun way to see the city and at a much quicker pace than walking or driving. Two and half hours seems like a long time, but to get to see basically all of the main tourist attractions, that is covering a lot of ground.

4. Wendella Boats: Chicago’s Original Architecture Tour
I took a water taxi from Chinatown to Michigan Avenue to hop on another boat for a tour through downtown and through Lake Michigan. If you have never been to Chicago and are looking for a cheap alternative to driving and paying the astronomical price of parking, the water taxi was only $10, and it was such a scenic and peaceful mode of transportation.

I didn’t learn that much from the boat tour as I had learned pretty much the same information on the segway tour and from my cousin, but I got so many pictures. Though it was quite cloudy and dark, it somehow made for beautiful pictures as the sun was attempting to peak out of the clouds near the sunset hour. It did eventually end up raining, but it didn’t slow the tour down.

I thought this was a great tour and it was only an hour and a half. Since you pick up and drop off on Michigan Avenue (a main street in the south side), you can easily get dinner afterwards or continue sightseeing. I also thought it was amazing to be out on Lake Michigan, as much as it terrified me, because I was riding on one of the largest sources for fresh water. Does anyone else have those moments where you become hyper aware of nature and its power? It was definitely one of those for me.

5. Neighborhood driving
My cousin decided to drive me around all these different neighborhoods in the south side as well as the north side. We visited places like South Shore, Hyde Park, and the University of Chicago before driving all the way over to Evanston to visit Northwestern‘s campus. Let me tell you, Northwestern has the most beautiful campus I have ever seen. 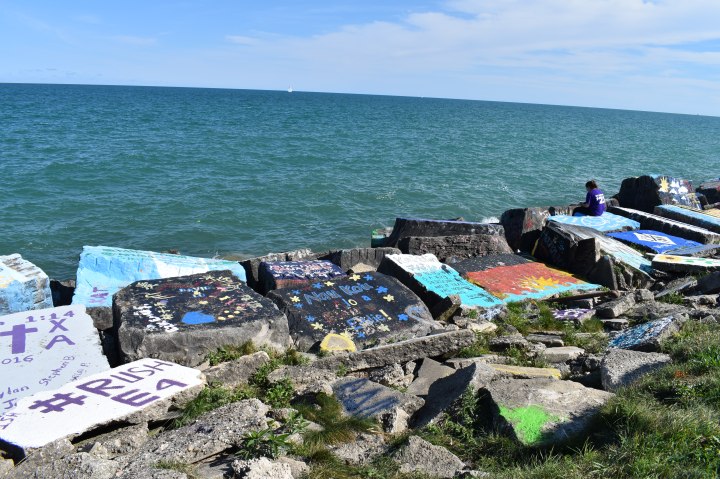 We headed back through Old Town, Uptown, and Lakeview to make our way to Wrigley Field. One thing we both noticed, even as someone who has never been to Chicago, is that there is a lot of modernization and gentrification taking place. I was shocked at how many historical landmarks looked like they had been recently renovated to reflect the modern times rather than preserving what the city is known for. Also any spaces that were previously used as office space, a restaurant, or a parking lot, have immediately slapped on “Coming Soon” residential living signs.

6. Garrett’s, Giordano’s, and Portillo’s
On the first day, I had my first Chicago dog at Portillo’s which is a hot dog with mustard, relish, peppers, onions, and tomatoes on a poppyseed bun. I originally didn’t think I would like this because I don’t generally eat anything on a hot dog except ketchup. I was pleasantly surprised at how much I enjoyed it (after requesting no onions or tomatoes) and it was very filling for one hot dog. 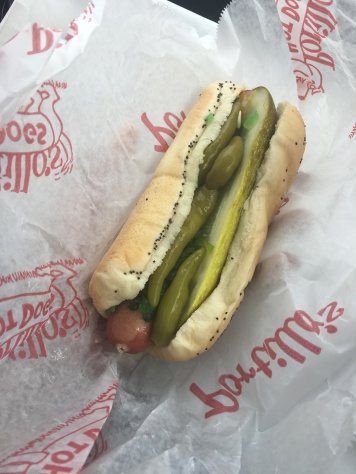 We started the second day by stopping at Garrett’s for popcorn because I “had” to try the Chicago mix, which is cheese popcorn and caramel popcorn mixed together. Personally, I didn’t understand the hype. It just tastes like the popcorn you can get at the store, and I also don’t like caramel popcorn, but I guess it worked as a combination overall.

I had my last meal at Giordano’s, obviously, and though I am not the biggest pizza person, I wouldn’t forgive myself if I didn’t try authentic deep dish pizza. I was again pleasantly surprised at how good it was, but I quickly found out this was due to there being more meat and cheese than tomato sauce–a.k.a. how pizzas should be. I could only handle a slice and a half, but I love that they are built for sharing. ❤

Final thoughts: Chicago is an incredible city that quickly demonstrated why so many people love it. It is filled with such an interesting history which always resonates deeply with me when I am on a trip, and explains why I always opt to do touristy things. If I hadn’t let my cousin take the reigns on the itinerary, I would have missed out on SO much. I don’t think I could ever live there, but this fully comprehensive trip let me know that I need to return as much as I possibly can.